Why Does 401GO Work With Nexus IT Consultants?

As with many of our clients, a critical factor in why 401GO works with us is the connection between our company’s founders.

Why Does 401GO Work With Nexus IT Consultants?

As with many of our clients, a critical factor in why 401GO works with us is the connection between our company’s founders.

Discover why 401GO co-founder Daniel Beck works with us in this new video: 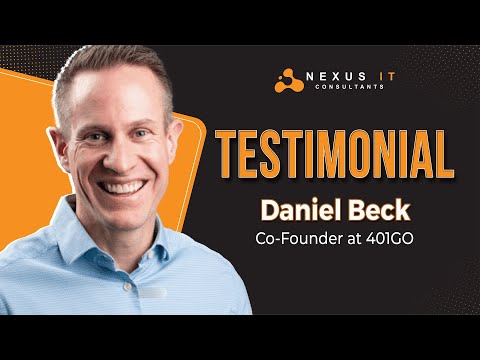 To Daniel, Earl Foote Is The Right Type Of Influencer

When Daniel thinks about Nexus IT, he thinks primarily about our founder Earl Foote and the effect he has had on his community, peers, and colleagues.

“Earl is very different,” says Daniel. “He uses all the connections he has for the benefit of everybody else.”

Daniel explains this about modern online influencers, which he often sees as the “spires” or the focal point of whatever organization they’re attached to. Earl, on the other hand, is a foundation.

Daniel appreciates that Earl provides the support and stability that Nexus, its clients, and its partners need to grow, succeed and improve. Earl helps by consistently bringing people together and building them up.

“Anytime I’ve been at a social event, he’s always introducing me to people,” says Daniel. “He genuinely cares.”

This community-focused, socially engaged edge makes the difference for people like Daniel, who know Earl and Nexus well. He and his company 401GO continue to work with us because they believe in the way Earl is leading our company (and everyone in our community) to bigger and better things.