Nexus CEO Earl Foote was joined by Ashley John Heather on this recent episode of Tech Beat to talk about his experience in launching businesses in a matter of days.

Is it possible to launch a business in ten days? You can if you understand how to simplify your idea and execute it with the right strategy—find out more in the latest episode of TechBeat.

Nexus CEO Earl Foote was joined by Ashley John Heather on this recent episode of Tech Beat to talk about his experience in launching businesses in a matter of days. Find out how he does it: 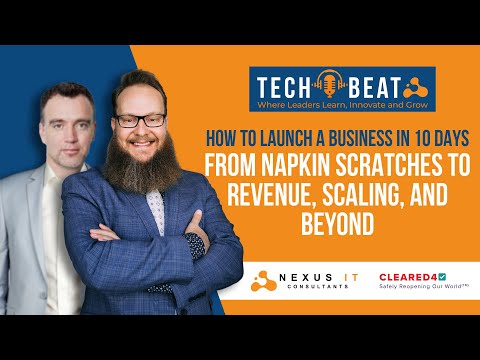 All About Ashley John Heather

Ashley John Heather is the Co-founder and President/COO of Cleared4 Inc. He has been developing software and marketing solutions for over 25 years.

His innovative software solutions have been used to redefine music recognition (Shazam), healthcare (Off The Scale), consumer retail experiences (Engage360), and more. He helped to co-found CHS in 2015 with Dr. Soumi Eachempati and Dr. Rob Todd.

As a child, Ashley lived in a number of different places as a result of his father’s career. Moving from the UK to France to the US and back to England, Ashley gained an appreciation for travel and new experiences.

“That forced change always opened me up,” says Ashley. “I always wanted to try new things.”

As such, Ashley has led a highly varied career. He designed video games with his brother in his teens, studied economics in university, and eventually worked with Ford.

After some time in that position, Ashley moved on to join a management consulting firm, at which time he became interested in setting up a business incubator. When his superiors refused to grant Ashley ownership over a portion of the business, he decided to leave and start his own.

The Key To Launching A Business In 10 Days

Over the course of his career as an entrepreneur, Ashley has integrated his unique skills and experience into a range of different markets. From Shazam to Off The Scale, Ashley has learned a lot about how to effectively launch a business. A key lesson he’s learned is to start simple, which is often the opposite of how entrepreneurs operate.

“As an entrepreneur, you always think big, and you think you need a lot to get started,” says Ashley.

Ashley explains how nearly a decade ago he was in the process of launching a co-work space. He wanted to build a fancy, extensively equipped building in the Hamptons where business leaders could network, connect, and more. Unfortunately, Ashley encountered a lot of challenges in properly representing its value and getting the resources he needed to make it a reality.

That’s when he decided to simplify it. In speaking with another business owner in the area, Ashley realized that the idea could be reduced to a single point: bringing great people together. He could do that right away by simply finding an available space. That meant that he could get started without having to raise millions of dollars in funding.

“We were up in business in ten days,” says Ashley. “Within 90 days I had a term sheet to launch the business in a 15,000 square foot building.”

The fact is that launching a business can be much simpler than some people assume. By reducing your plan to the core concept and looking for a fast, low-cost way to start presenting it to clients, you can get off the ground so much faster.

“We as entrepreneurs create these self-imposed barriers,” says Ashley. “It stops us from getting to the nitty-gritty of what the idea is.”

To learn more about rapid business development from Ashley, make sure to check out the complete recording of this TechBeat episode.