Want to get into the crypto investment space but don’t know where to start? That’s what Muunifi is for. Discover how this Web3 social media platform works in this episode of TechBeat, featuring Garrett Openshaw.

Want to get into the crypto investment space but don’t know where to start? That’s what Muunifi is for. Discover how this Web3 social media platform works in this episode of TechBeat, featuring Garrett Openshaw.

Nexus CEO Earl Foote was joined by Garrett Openshaw on this recent episode of TechBeat Bytes to talk about the new social media platform Muunifi, and how to break into the crypto investment space: 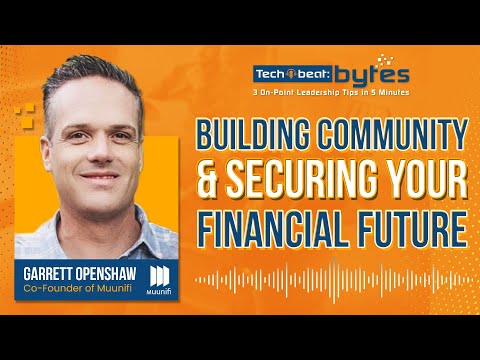 Who Is Garrett Openshaw?

Garrett Openshaw started his manufacturing career in China in the late 90s and early 2000s. In 2004, he started a tv production company in China, soon becoming the exclusive licensee of all CBS and Paramount formats.

In 2013 his family moved back to the states, where Garrett spent some time working in the family business. In March 2021, Muunifi was born, and they planned to launch in May of this year after ongoing development.

Muunifi is a Web3 social media platform. It is community-owned, built for creators, and focused on finance. The content on Muunifi is based on investment strategy and news.

“We’ve created a platform to give creators more tools and ownership over their own community,” says Garrett. “Web3 is really the ownership community.”

On Muunifi, while the interface may look similar to a traditional social media platform, the incentives are very different. The community has governance and control of the platform’s direction, and they share the revenue and profits generated by the activity.

“We built a platform to be a hub for how people come together for investment owned by the community and provides a safe place to get trusted content about finance and investments,” says Garrett.

Furthermore, user data is owned by the users. Rather than having your data used for advertising and secondary sale (as on current Web2 social media platforms), the community on Muunifi owns that data. They can decide whether to sell that data for profit or maintain their privacy.

Currently, Muunifi is very focused on crypto, the most popular and engaging trend in modern finance. Users can share investment strategies, connect and comment on news, and more.

Cryptocurrency is akin to PayPal, which allows you to pay digitally without needing physical money. However, unlike PayPal or a debit card, cryptocurrency is not backed by a government or banking system. Instead of having a central system where all the money is kept in one place, crypto is kept in wallets. Each individual owns the crypto in their wallet instead of a dollar bill which is a promissory note.

“Everybody is crypto-curious at this point,” says Garrett. “There’s a lot of really amazing innovation.”

How Muunifi Is Building A Community

One aspect of Muunifi’s genesis was the loss of community that many of us experienced with the onset of the pandemic. Garrett recognizes that to share values, a community must have shared values. That’s what he and the other founders at Muunifi want to create.

Furthermore, the past few years have seen investment turn into a team sport. As more and more people joined ad-hoc investment communities, Garrett and his co-founders realized that well-organized spaces were far and few between.

Lastly, they also recognized the rapidly increasing inflation rate in the current economy, which vastly outpaces wage growth. Those without investment income will make less this year than you did last year and even less than that next year.

Unfortunately, most people don’t know where or how to start investing. Those in search of investment insight can find it on Muunifi.

Keep an eye out for further news about Muunifi’s website, app development, and launch.