What You Need To Know About The Cyber Attack On Ukraine

Earl Foote recently appeared on the Dave & Dujanovic podcast to talk about the cybersecurity and cybercrime implications of the rising tensions between Ukraine and Russia.

What You Need To Know About The Cyber Attack On Ukraine

Do you understand how battles are won and lost in the era of cyber warfare? Earl Foote recently appeared on the Dave & Dujanovic podcast to talk about the cybersecurity and cybercrime implications of the rising tensions between Ukraine and Russia.

Over the past few weeks, tensions have mounted at the Russia-Ukraine border as President Putin mobilized troops and made overtures of invasion. While the real-world conflict has been minimal so far, on Feb. 15, Ukraine suffered a major cyberattack on its governmental and banking systems.

“Based on the trail of breadcrumbs, everyone is speculating that these cyber attacks are coming from Russia, “says Earl. “The data footprint seems to suggest that as well.”

Do you know what implications this has for the West and what lessons the business world should learn from these incidents? Nexus CEO Earl Foote joined the hosts of the Dave & Dujanovic podcast to give them a cybersecurity expert’s perspective. 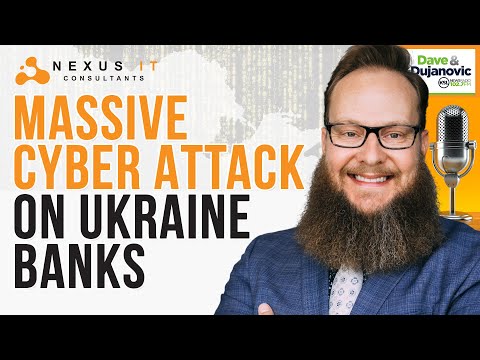 “With tensions mounting between those two countries, it’s pretty easy to conclude that what we’re seeing is the next evolution of warfare, “says Earl. “The first wave of cyber warfare attacks destabilize populations, cause pandemonium and confusion.”

According to Earl and many other cybersecurity industry leaders, this attack is a textbook example of cyberwarfare. Ukraine confirmed that the systems compromised in the attack are all critical ministry and banking targets:

The attacks used Distributed Denial-of-Service attacks which flood the target website host with multiple data requests, resulting in lags and crashes. They also employed a form of malware similar to ransomware, but instead of encrypting the data, it simply deletes it.

The idea is that by causing chaos at the citizen level (disrupting their access to utilities and finances), Ukraine will be that much easier of a target if and when further military action is taken. A less organized enemy is less capable of defending itself.

“We saw that happen on our own soil with Colonial Pipeline, “says Earl. “That’s probably the tactic that is being carried out here so that if Russia chooses to mount a physical attack, it is probably a much easier scenario for them to take control.”

What Does This Attack Tell Us About The Future Of Cyber Warfare?

This is a clear example of the threat that nation-state-affiliated hackers pose to the world. While they can often be involved in geopolitical conflicts between Russia and Ukraine, these cybercriminals also target businesses. That’s why you need to make sure you’re protecting your data.

How To Protect Your Systems Against Similar Cyber Attacks

Are You Defending Against Cutting Edge Cybercrime Attacks?

Nexus IT Consultants offers comprehensive cybersecurity services, including SOC, SIEM, and more, to help you adequately protect your organization against modern cyber threats, including nation-state attacks.