Erick Cabrera Shares His Experiences With Nexus IT Consultants

A key aspect of Erick’s workplace satisfaction is getting to work with our CEO, Earl Foote. The team culture at Nexus IT Consultants comes right from the top down.

Working At Nexus IT Consultants

Find out firsthand from Erick Cabrera, one of our Business Technology Consultants: 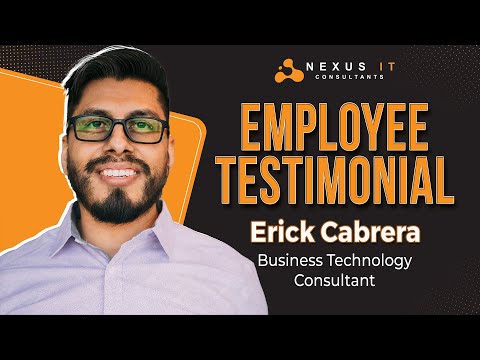 Why Does Erick Enjoy Working At Nexus IT Consultants?

“I’m very proud to be part of the Nexus team,” says Erick.

A key aspect of Erick’s workplace satisfaction is getting to work with our CEO, Earl Foote. The team culture at Nexus IT Consultants comes right from the top down.

As an active and engaged leader, Earl is intentional in contributing to the social environment that makes Nexus IT Consultants such a great place to work.

“It’s easy to identify with Earl, who I consider my friend,” says Erick. “It’s easy to have a one-on-one talk with him.”

Earl is an undeniably approachable boss, which has helped to develop a comfortable, communicative culture here at work. Erick knows that if he has a question or concern, he doesn’t have to keep it to himself or try to send it up a management chain.

Erick knows that Earl doesn’t just see him as a resource for the business; he knows he’s treated like a person who matters. That’s because Nexus IT Consultants recognizes our staff members as the foundation of everything we do—the more that Earl and the management team can get to know them and foster their development, the better it will be for everyone.

“We’ve shared many moments of success and failure, but we’ve learned,” says Erick. “Even though he’s my boss, he is very approachable—I can reach out to him any time.”