The Positive Potential Of Holistic Entrepreneurship

Nexus CEO Earl Foote was joined by Kristi Holt on this recent episode of Tech Beat to talk about how she makes a positive impact through holistic entrepreneurship.

Nexus CEO Earl Foote was joined by Kristi Holt on this recent episode of Tech Beat to talk about how she makes a positive impact through holistic entrepreneurship. 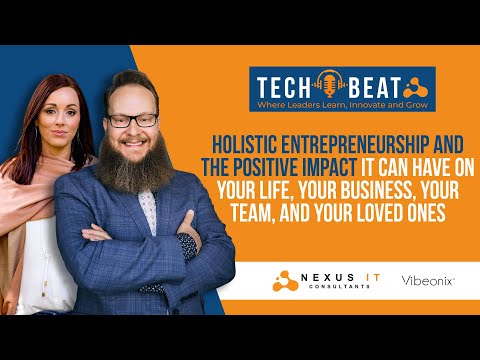 All About Kristi Holt

Kristi is the CEO and founder of Vibeonix, a company that quantifies wellness using voice analysis and artificial intelligence to help develop holistic well-being in employees and teams. The product helps users better understand and manage their emotions, promoting greater self-awareness.

Kristi has made a career out of developing her leadership skills, getting involved in her community, and promoting positive change. She has worked with 10-star companies in commerce, manufacturing, and media sectors. As a serial entrepreneur, Kristi has successfully launched and sold six startups.

“I have been around entrepreneurship my whole life,” says Kristi. “I was taught to think big and be an entrepreneur — that’s where the American dream is.”

Kristi’s father instilled a penchant for good business practices and the value of education at a young age. He paid Kristi and her siblings to work for his company, with Kristi developing a fondness for accounting in high school. She also read a lot of business-based self-help books throughout her teenage years, which built a foundation for her future career.

A committed learner and professional, Kristi worked a series of jobs as she absorbed the skills and knowledge that would eventually lead her to start a number of different companies. From night shifts at restaurants to the beauty industry, each step Kristi took taught her a new lesson and made her more effective at whatever she set her mind to.

She eventually started and sold her first company, a strip mall spa business, by the age of twenty-six. After that, she founded and sold a number of other businesses, but the work had started to take a toll.

“I had run everything like a true entrepreneur,” says Kristi. “I was burned out and I was exhausted.”

What Is Holistic Entrepreneurship?

It can be easy to let your professional pursuits own you. Becoming a workaholic can feel like success, but eventually, it will grind you down.

“I felt like my companies owned me,” says Kristi. “It had run me into the ground.”

After years of pouring a majority of her time into developing and selling businesses, Kristi recognized that it was unsustainable. She decided to take a salaried position with another company so that she could re-evaluate and gain a new perspective.

“I gave myself permission to pause as an entrepreneur,” says Kristi. “I could just realign.”

This pause allowed Kristi to reestablish her priorities, and would eventually lead her to found Vibeonix by following a holistic entrepreneurship mindset. The idea is that where a conventional entrepreneur takes on significant financial risk to run a new business, a holistic entrepreneur follows a different “way of life”. Kristi sees it as having no separation between love, life, work, and spirituality.

“I realized that this idea that you’re separate from your business is not true,” says Kristi. “I had to make a commitment that I was going, to tell the truth and ask for help when I needed it.”

It’s a decision to be present wherever you are. For example, when you’re with your spouse, you can’t be thinking about the work you need to do on your business. In the same way, when you’re at work, you need to be able to focus on that and not your family.

“The word balance does not exist,” says Kristi. “I think that’s what causes the burnout.”

To learn more about holistic entrepreneurship from Kristi, make sure to check out the complete recording of this TechBeat episode.