How iAllo Is Fixing Customer Service

iAllo wants to give consumers the tools they need to optimize the customer service experience. Discover how it works on this episode of TechBeat, featuring Gezel Nehmadi.

iAllo wants to give consumers the tools they need to optimize the customer service experience. Discover how it works on this episode of TechBeat, featuring Gezel Nehmadi.

Nexus CEO Earl Foote was joined by Gezel Nehmadi on this recent episode of TechBeat to talk about her company iAllo, and her experience as a female leader and business founder: 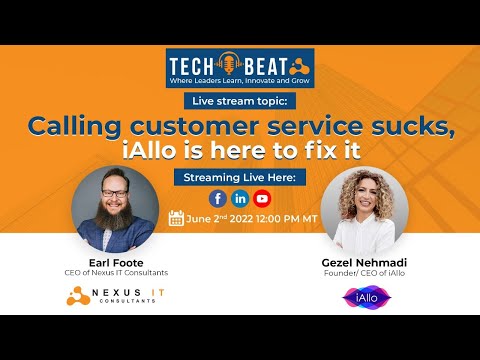 Gezel Nehmadi, is the founder and CEO of iAllo. She is an experienced product and UX /UI designer with more than a decade of experience with SaaS solutions.

Prior to her current career, Gezel pursued many different callings. She spent time in theater and drama, and after that, explored education and a career in psychology. She eventually landed in the UX/UI space while looking for something that would give her more freedom.

“I’m a woman, I don’t want to deal with the glass ceiling, I want to have freedom,” says Gezel. “I feel like UX/UI really hit all of that.”

Gezel began ravenously consuming all the knowledge she could in the field, attending “YouTube University” and self-teaching the skills she needed. After interning and freelancing for some time, she gained the experience she needed to make her mark in the field.

“The main realization was that consumers need tools,” says Gezel.

Whereas companies have CRM platforms, auto attendant customer service reps, and other tools to help streamline the service experience on their end, the consumer is left with very few to help them on their side. That’s why Gezel started iAllo.

“We’re calling it customer service, but there’s no service for the customer,” says Gezel.

iAllo helps to automate and streamline the customer service experience, providing insight as to the best time to call, how to seamlessly route your call through the touch-tone menu, and more. Put simply, it helps consumers manage their interactions with businesses.

Gezel’s extensive experience dealing with customer service calls is a result of her mother’s cancer diagnosis. She spent so much time dealing with insurance and medical companies over the phone that she became an expert in how phone-based customer service operates, and the many ways in which it fails to properly serve the customer.

“That’s what led me to where I am today,” says Gezel.

Navigating Life As A First-Time Founder

While Gezel was well-prepared to spearhead the design of her new product, she knew she couldn’t do everything for her new company by herself.

“Building the app was in my wheelhouse,” says Gezel. “The thing that was really helpful to me was learning to reach out and ask for things.”

As much experience as Gezel had as a user of customer service systems, she recognized that she needed insight from people on the other side. What she found was that it wasn’t too difficult to find that knowledge, once she started asking for it.

While many founders are intent on doing as much as they can on their own, the fact is that it doesn’t always have to be that way. Accessing the skills and knowledge you need to take your offering to the next level may just be a matter of asking the right person.

“Chances are, there are people that can help you—just ask,” says Gezel. “If they say no, that’s OK.”

Once she had the app prototype designed, Gezel began seeking feedback. She shared it with her friends and took their insight into account as she continued to tweak the design, and soon enough, she was encouraged to start approaching businesses.

While this was certainly the right step at the time, looking back, Gezel knows it could have been smoother. She would have better organized the process of approaching businesses if she were to do it again.

After this testing phase, Gezel felt finally ready to fully commit to her app. She needed to find someone to build out the app from her prototype, which led her to pitching to venture capital firms.

Throughout much of this process, she learned as she went. This is a key point for all entrepreneurs to remember: you’ll often have to face new challenges, and it’s simply a matter of tackling it head-on and tapping available resources wherever you can find them.

Gezel’s Experience As A Female Founder

As an active and successful woman in the tech sector, Gezel has experienced more than her fair share of both direct and systemic sexism. This became especially apparent as she began getting more involved in the crypto and web3 spaces in recent years.

“I never realized the feeling of being a female minority really until this past year,” says Gezel.

Gezel would often find that while she could very effectively network at these events when speaking directly to other men, as soon as another man entered the conversation, it was as if she disappeared. In light of this, Gezel began making more of an effort to reach the other women in these spaces.

When she attended events or connected with new networks, she would seek out women and connect over these shared experiences. While awareness of this sort of pervasive sexism is growing, it’s still a prevalent issue in the sector.

“I needed to reach out to this female world of support,” says Gezel. “I’m still learning how to do that.”

The Importance of Having The Right Mindset

One general lesson that Gezel shared in this episode concerns the mindset she’s held for a long time. It’s a particular way of framing one’s expectations in order to better deal with failure and fear of failure.

“I have a mindset that has helped me my whole life,” says Gezel.

Gezel’s mindset is known as “video game theory”. The idea is that in any given situation in your life, you will likely fail, and fail often. You try to beat a given “video game level” over and over, and eventually, you’ll beat it, and face the boss. Once you beat them, you’ll move onto the next level, which may present new challenges, but will need to be beaten in the same way.

“I’m at this level, and I’m going to keep trying different ways until I reach the boss,” says Gezel. “And when I finish that, I know the next level will be the same process again.”

This mindset helped Gezel to manage her expectations. She never assumed she would succeed easily; she always knew that getting what she wanted would take perseverance.

“That mindset has helped me so much because I never expected it to be easy,” says Gezel.

No matter where you’re at in your career as a founder and entrepreneur, consider applying this mindset to your day-to-day life. It provides a valuable and useful perspective on the challenges you face and how you deal with them.