Why Does James Swenson Enjoy Working At Nexus IT Consultants?

Why do our team members love working as a part of the Nexus IT Consultants team? We’re proud of the culture we’ve built here, but you shouldn’t just take our word for it.

Start Your IT Career With Nexus IT Consultants

Why do our team members love working as a part of the Nexus IT Consultants team? We’re proud of the culture we’ve built here, but you shouldn’t just take our word for it.

Find out firsthand from James Swenson, one of our Help Desk Engineers: 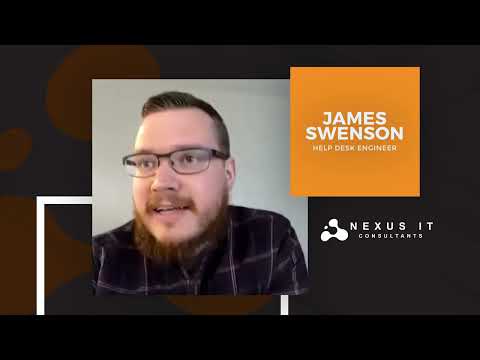 Why Does James Enjoy Working At Nexus IT Consultants?

“Coming over to Nexus IT Consultants has been one of the most amazing things that I’ve been able to do in my career,” says James.

James has only been with Nexus IT Consultants for a few months, but already, he has recognized how different the company culture is from other businesses he’s worked for. James has seen how the entire team here from the CEO to the newer hires like him are fully committed to the services we deliver to clients.

“The way we interact with clients is second to none,” says James.

James knows he’s found a job in which he can grow and develop as an IT professional. Both in terms of the workplace opportunities available to him, and in how his superiors have taken the time to get to know him and encourage his growth.

“The leadership here is outstanding, they really give you the feeling that they care about you, they support you, and are invested in your future and success,” says James.

This is true of both James’ immediate supervisors and our CEO Earl Foote. As the company’s leader, Earl doesn’t just talk the talk; he walks the walk as well, maintaining a direct and approachable presence in the day-to-day operations of the business.

“Earl is hands-on all the time, and that’s something you don’t get at a lot of companies,” says James.

James is also proud to be part of a business that is so ingrained in its local community. Through charitable initiatives, workplace development opportunities, and more, Nexus IT Consultants actively gives back to the community that has helped to build it.

“I really appreciate Nexus IT and all they do for the community here in Utah,” says James. “I’m thrilled to be part of the team.