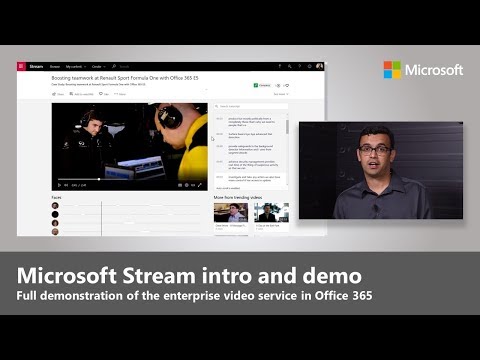 Here is a breakdown of the new video service called Microsoft Stream. It has a lot of potential as a video streaming service for businesses.

The role of video in the modern world of business cannot be ignored. In most modern workplaces, video allows for the efficient sharing of information and the training and educating employees. It is also useful in building a culture and increasing engagement in the workplace.

The History of Microsoft Stream.

In 2016, Microsoft released the beta version of Microsoft Stream. The video service is intended to make it easy for people inside an organization to upload, manage, and share videos in a secure environment.

A year later, Microsoft has rolled out the service to 181 markets all around the world. The service will be provided in 44 languages. Microsoft will provide it to all users of the Office 365 service. Additionally, the company announced that it would come up with new and interesting features for the service.

The One-Stop Shop for Video.

The Microsoft Stream service is intended to be a single stop destination for managing videos. It will be integrated into Office 365 and with the IT management and security needs that all businesses require. All individuals within the organization will have a destination where they can contribute videos and discover videos generated within the company.

A Service Built for Collaboration.

If you already use Office 365, Microsoft Stream gives you an extra tool for more collaboration. You will be able to seamlessly integrate it into other apps that you use daily within Office 365. People collaborate using multiple tools in an organization and this service now allows you to add video. Those on Office 365 can begin to enjoy this integration right away.

The Microsoft Stream boasts of having some advanced intelligent features. Here is a breakdown of these features:

In Microsoft Stream, transcribed audio will be searchable. You simply need to type in a few descriptive words to get to any point in the video where you want. This feature is quite important. In most cases, business videos can be as long as 60 minutes long. However, employees may only need to watch a small 3-minute section that is relevant to their department. This will allow employees to fast forward to sections that matter to them.

Face detection allows users to view when each person in a video is shown. Through a clickable timeline, a user can jump to instances when someone’s face is shown.

Time codes are displayed in the comment section, and they link to text transcripts or table of contents. Thus, users can jump to a specific point in the video where they think they should be.

Security is a Priority.

Microsoft has used its industry-leading encryption for all video to ensure that customers who use Microsoft Stream share their videos with only the intended audience. Security management has been made quite simple with the Azure Active Directory.

Besides that, system administrators can tweak guidelines so that employees have to accept terms before uploading any video. The videos can be viewed seamlessly across devices, which allows employees to work at home or at the office. Some of the features you get include screen readers, closed captioning, high contrast, and keyboard navigation.

There is Increased Permission Management.

Microsoft Stream Groups, which are based on Office 365 Groups, allows users to better manage video permission. That simply means that videos can be made available to only select groups.

Office 365 Video Will Be Phased Out.

Office 365 Video will be phased out over time. However, it will not happen overnight. It is going to be done in stages, to ensure a smooth transition. Besides that, Microsoft will be careful to ensure that they get to retain all their content.

It is built on Experience.

The Microsoft Stream service is based on lessons learned from Office 365 Video. The result is that Microsoft has been able to achieve deeper integration and intelligence into Office 365.

Areas that Could Use Improvement.

In essence, Stream is a password-protected version of YouTube. It is a bit rudimentary, although that may change with time. Some of the areas that could do with improvements are:

Besides serving videos to internal audiences, businesses need to be able to stream to other partners, customers, and to the public. However, that is not currently possible with this service. Only an internal audience can view the videos.

Today, the service is limited to the cloud. However, it may be nice if on-premises and private cloud hosting could be supported.

The line between content management and video creation has been blurred in recent years. The Stream service has no video creation tools. Besides that, Office Mix has no support for Stream publishing.

Web-based video editing has become the norm in enterprise video platforms. The ability to cut videos, trim, split, and even splice videos together has become quite common. However, Stream has not yet upgraded to a video editor tool.

The ability to track the performance of videos shared within the organization is important. However, Stream only has a simple count of the number of views per video. Some of the features that could be added later are drop off rates, views by user, and completion rates.

Although its name hints at it, Microsoft Stream does not have live stream support. However, that may be provided in coming months. It is quite clear that the company has invested a lot of effort into this service and major improvements can be expected in coming months.