Mike Hadley And His Role At Nexus IT Consultants

Find out firsthand from Mike Hadley, one of our Senior Business Solutions Advisors: 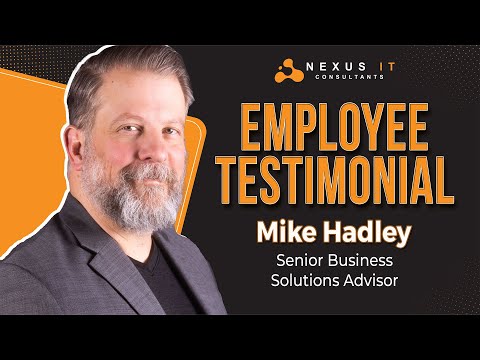 Why Does Mike Enjoy Working At Nexus IT Consultants?

“I have never been with a company with a vision that I have believed in more,” says Mike.

For Mike (and so many professionals these days), it’s not enough to simply have a day job and paycheck. It’s important to be a part of a company that he can believe in, both in terms of its mission and the way it goes about pursuing it.

“I think of Earl and Nexus in terms of having the highest integrity,” says Mike.

Mike appreciates being a part of the Nexus team because it works in a culture of integrity. Mike knows that, from top to bottom, the staff here comports itself with honesty, commitment, and a strong work ethic.

Mike doesn’t have to worry about being at a company where clients are misled, and where the bottom line is pursued above all else. He can fully engage as a staff member at Nexus IT Consultants because our organization matches his values.

“It’s really refreshing to work with someone with that much integrity,” says Mike.