My Life As A Lifelong Immigrant

Entrepreneurs come from all walks of life, and every one of them has a thrilling story to share about how they got to where they are today. Discover more in this episode of TechBeat, featuring AtlasRTX CEO Bassam Salem.

TechBeat: My Life As A Lifelong Immigrant

Entrepreneurs come from all walks of life, and every one of them has a thrilling story to share about how they got to where they are today. Discover more in this episode of TechBeat, featuring AtlasRTX CEO Bassam Salem.

When you have your midlife crisis, and begin worrying about what you’ve achieved, what will you do? Stick with your current career path, or try for something greater?

This was Bassam Salem’s dilemma before he launched AtlasRTX—discover how he did it in this episode of TechBeat. 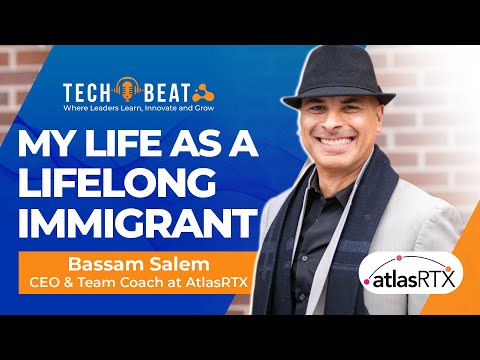 Who Is Bassam Salem?

Bassam Salem was born in Cairo, Egypt. Before his 10th birthday, he’d lived in Paris, France, for a year and Bracknell, England, for nearly two years.

His mother was an electrical engineer, and the first person to introduce Bassam to computers. His father was a colonel in the air force. These diverse circumstances at such a young age instilled in him a certain comfort with being different.

“I remember, as a teenager, feeling like I had spent my whole life as an immigrant,” says Bassam.

Before his 14th birthday, his family emigrated to the United States on foreign student visas to the University of Utah in Salt Lake City, Utah.

“My parents are academics, and their belief was that education is what would help us make a life here,” says Bassam. “Eventually I completed four degrees at the University of Utah.”

The Immigrant Experience: Stuck In No Man’s Land

Part way through the episode, Earl broached the idea that a key part of the immigrant’s experience is that they, to an extent, always feel stuck in no man’s land. Never quite totally feeling as though they belong where they have moved to, but unable to turn back and go home again.

“While you see yourself just like everyone else, I would always get asked, ‘where are you from?’” says Bassam. “I remember just wishing I could fit in, and talk about other things.”

That said, once he was here long enough, his identity as an “other” began to recede. Bassam explained that, by the early 2000s, he felt like an American.

He had lived in Utah for the majority of his life at that point, and had established himself in his education and career. For all intents and purposes, his identity as an “immigrant” had faded into the back of his mind—he felt at home.

However, in an instant, that all went away. 9/11 changed everything for Bassam, and affected his daily life, minute by minute.

Over the course of a few weeks, Bassam was forcibly reminded that this country was not as much his home as it was others’. It was an ugly wake up call, which has contributed to the way that Bassam conducts himself in business to this day.

At a certain point in his career, Bassam began dealing with a midlife crisis. He was proud of his accomplishments, but they were often in secondary roles, and he wondered if he should strive for more. The core question he was asking himself was, “what would I tell my parents I had achieved?”

Despite leading a successful career and being highly educated, Bassam knew he wanted to do more. When talking to a friend about this, he was advised to do something he was truly passionate about, but just for one year. Bassam took this advice and threw himself into a new project, knowing that, at most, it would only take a year.

With that, Bassam began pursuing his penchant for teaching. He wanted to consult, coach, and teach what he had learned over the course of his career so far.

Soon enough, Bassam also realized that he wanted to be able to speak from experience when it came to entrepreneurship. That would require him to launch his own company, which he soon did with AtlasRTX.

Invest Time In Your Passion

As you can see from Bassam’s story, sometimes changing the narrative of your career (and life as a whole) is as simple as pursuing your passion short term. If you commit yourself fully and set realistic goals, it just might grow into something greater and more lasting.

Make sure to check out the full episode above to get all the details on Bassam’s journey.