The team of professionals from Salt Lake City’s Nexus IT Consultants is thrilled to be partnering with KPCW Radio in support of their Summer Pledge Drive! The KPCW Summer Pledge Drive will span the entire week of August 21st to 25th 2017 and the Nexus Challenge Hour will take place on Wednesday, August 23rd from 5:00 pm –  6:00 pm. 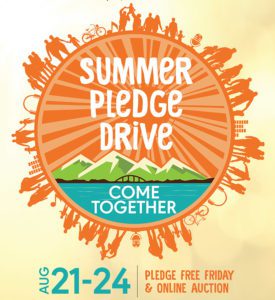 Nexus IT Consultants is proud to be hosting a Community Challenge Grant in support of KPCW Radio. The Nexus team is made up of avid KPCW listeners and they are thrilled to support such a vital organization supporting Park City and the entire Wasatch Back region. After all, KPCW is the non-profit group that offers all other local groups a free-forum to connect with the community and promote their local initiatives and events.

“We’re so excited to be partnering with KPCW in support of their Summer Pledge Drive,” says Nexus IT Consultants CEO, Earl Foote. “KPCW provides our community with such a vital service. Whether it be local news briefings, weather and traffic reports, lost pet postings or event promotion, KPCW is the voice of our community.”

“We’re honored to be serving as a Community Grant Challenge partner,” continues Foote. “We encourage our colleagues, clients and fellow community members to light up the airwaves and give generously during our Challenge Hour. It’s amazing what can happen when a community comes together and we look forward to driving huge support for KPCW.”

Community members interested in contributing can call in during the Nexus Challenge Hour from 5:00 pm – 6:00 pm on Wednesday August 23rd by calling (435) 649-9004. Those interested in the online auction can make bids August 21st through 25th at www.biddingforgood.com/auction/auctionhome.action?vhost=KPCW.

Want more information about how you or your business can join with Nexus to support the amazing work done by KPCW? Reach out to the Nexus team directly at (435) 487-9099 and ask about the KPCW Summer Pledge Drive!