Get To Know Our Rockstar Intern Iva!

I wanted to introduce you to Iva Chho. She’s been working with us at Nexus IT all summer. Iva is a Senior at Park City High School. She came to us through the PCCAPS Program.

Earl Foote from Nexus IT introduces us to Iva, a student intern from Park City High School. 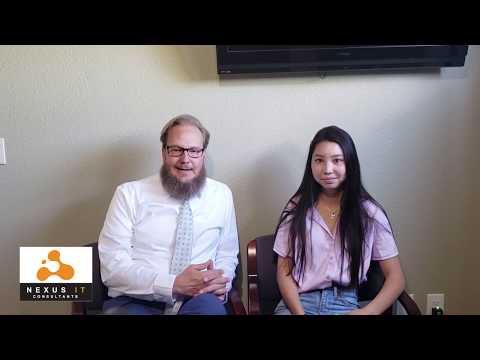 Earl: I wanted to introduce you to Iva Chho. She’s been working with us at Nexus IT all summer. Iva is a Senior at Park City High School. She came to us through the PCCAPS Program.

Can you tell us more, Iva?

Iva: The PCCAPS Program is the Park City Center for Advanced Professional Studies. We work with real-life clients to create a product or solve a problem. My older brother was in the PCCAPS Program a few years ago in software development.

Last year I was in the engineering branch where I developed a friendship with the PCCAPS Director. He invited me to go to an Economics Summit; this is where I met Earl from Nexus IT.

Earl asked me about my interests. I told him that I wanted to go into cybersecurity to fight cyber terrorism. This is how I got involved with Nexus IT. It’s an awesome opportunity. This year in PCCAPS I’ll be working on a few applications.

I’m also the president of a club at Park City High School called “Girls in Tech.” We mentor and teach girls to do “techie things.” This year we’re focusing on web development and HTML.

Last year we held an event called a “Hackathon.” It was Utah’s first all-girl hackathon.

Earl: We have a massive problem in the IT industry with so few women in tech. We need more women in the industry. They are fantastic engineers and are generally more organized and productive than their male counterparts!

It’s super encouraging for us to see people like Iva enter the technology industry and leading other women to do the same.

Iva, what would you say to other girls out there who think technology is a little nerdy? Or for those who are considering a career in IT?

Iva: I definitely think the mindset is developed early on that technology isn’t for girls. Luckily, I was raised by a very supportive family with a lot of family members involved in IT. I never developed the mindset that tech was only for boys. Technology is something that I’ve always been interested in.

I would tell other girls who are interested to just get involved in technology, join clubs, take STEM classes. The more you experience technology, the better it gets!

Earl: Most schools now have women in tech clubs and programs. And there are also community programs that girls can get involved in.

Iva: Yes, and you’ll meet other people who are interested in technology. That’s how I met my best friend. You end up feeding off each other’s love for technology.

Iva: I’m a huge nerd. I like teaching myself a lot of things. I’m now learning about white-hat hacking and pen-testing. Other than that, I’m really into fashion.

Basically, I go around Nexus IT and ask others if they need help. They’ve all been so awesome and helpful. The biggest project that I’ve been helping with is patch management for our clients.

Earl: The work that you’ve been doing here is very helpful. With patch management, you’re making sure that our clients’ machines are secure. You’ve been helping clients who have trouble getting patches installed by getting in touch with them and manually updating their computers so they’re not vulnerable to cyber security risks.

You also helped us migrate our documentation database to something more secure as well, right?

Iva: Yes. We’re using a method that is more secure now. It was a lengthy process, but I got it done!

Earl: We want to thank Iva for all the help she’s provided us here at Nexus IT.