Protecting The Edge Territory Of Your Network

Do you know how to defend your organization against phishers, hackers, and other threats—find out more in the latest episode of TechBeat.

TechBeat: Protecting The Edge Territory Of Your Network (With Peter Bookman)

Do you know how to defend your organization against phishers, hackers, and other threats—find out more in the latest episode of TechBeat.

Nexus CEO Earl Foote was joined by guardDog.ai founder Peter Bookman on this recent episode of Tech Beat to talk about cybersecurity defense in the modern age: 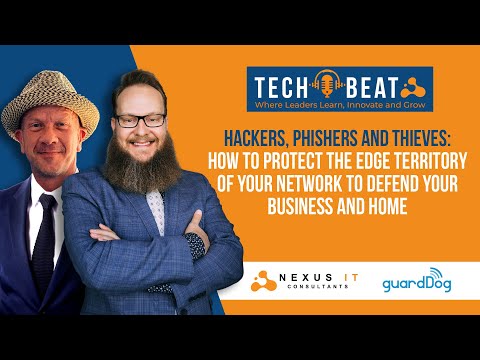 All About Peter Bookman

Peter Bookman has spent more than 25 years leading teams and disrupting markets with numerous exits. Time and again he has identified and taken advantage of key opportunities to enter a market, develop value and sell at a profit.

However, he’ll be the first to recognize that not every business decision is an absolute win. Sometimes you need to see when a stumble or an outright failure is just a chance to learn and do better.

“Entrepreneurs all know it’s not all wins—some of them are lessons,” says Peter. “It’s maybe cliche, but it’s also something really important.”

Over the past decade and a half, Peter has started a number of businesses and sold them to globally recognized names, gaining true momentum as a serial entrepreneur. Peter has deep experience in engineering and is credited as an inventor to 14 patents in both software and hardware intellectual property.

Headquartered in Salt Lake City, Utah, guardDog.ai has developed a cloud-based software service with a companion device that works together to simplify network security.

Every business, government, healthcare institution, home consumer, or other organization, is grappling to find security solutions that are adapting to this changing world. guardDog.ai is pioneering new innovations designed to meet these challenges.

“Now that we’re two years into the corporation, we’re really pleased with the results,” says Peter.

Recognizing the inherent complexity in network security initiatives, Peter and his team have worked hard to develop a comprehensive solution that simplifies the process and minimizes the total cost of ownership for customers. The solution exposes invisible threats on networks, and the devices attached to them, with patented technology to address and prevent cybersecurity threats before they compromise network environments.

“We’d like to see every network being watched over, and want to provide the safety we all deserve for the devices and the network itself,” says Peter.

What Is Edge Territory?

“Edge territory” refers to the vulnerable surface beyond the perimeter of the network itself. In a remote work model, or a vast Wi-Fi network operating across a large space, the edge territory is where all the connected devices are.

Think of it this way—at the office, everything is protected by the same set of cybersecurity solutions: firewalls, antivirus software, etc. These are defenses that you’ve invested in and can trust.

Is the same true of your employees’ home networks and personal devices? Probably not.

With so many employees operating remotely, working from a laptop or smartphone, how can you be sure that your data is completely secure? Are you taking the necessary steps to maintain security while your staff works from home?

guardDog.ai is designed on the premise that any device adds potential vulnerability to a network. Especially in the modern age of remote work, the edge territory has greatly expanded, exposing organizations to a much higher degree of risk.

guardDog.ai keeps an eye on this vulnerable area, utilizing artificial intelligence to recognize, expose, and help prevent cyber security threats that target these unsecured devices and penetrate the network.

To learn more about serial entrepreneurship and network security from Peter, make sure to check out the complete recording of this TechBeat episode.