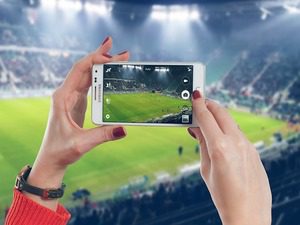 Over three years ago, Samsung indicated that in the near future, the company was interested in developing “transparent” displays that weren’t meant just for offices and those who were wealthy enough to afford them. In fact, they planned on targeting the mainstream consumer market. At the same press release, they showed off their first transparent LCD screen. The pricing was such that it was obviously meant for entrepreneurs that wanted to show off some of their newest or prettiest products on a huge, color-rich screen. However, Samsung never really saw a huge profit with this product, but now they have introduced a new generation of transparent screens, and there’s a buzz.

The new displays sport a whopping 55 inch screen, which was even larger than the ones the company showed in 2012. However, the new products do not appear to be targeted at the mainstream consumer just yet. One of the built in features in the new screens is Intel’s Real Sense. This is camera technology that allows a display to take a quick, but accurate, measurement of a person while they pass by (or when they stop). This helps target ads at the right height and has the potential to air ads that are gender-specific, for example.

Samsung’s transparent displays obviously aren’t the only option when it comes to displaying computer and TV ads in stores, but the displays do have a distinct advantage: novelty. While that is not a permanent advantage at all, it does get people watching today and for at least a year to come, and that’s more than many marketing campaigns can promise. For example, a woman comes in looking for dresses. The monitor detects she is a woman and her height and “tries” the dresses onto her digitally. Then, it can suggest a purchase or tell her where the dress is located in the store if she enjoys what she sees. This is something that regular LCD screens are not capable of doing.

Currently, Samsung has not disclosed a price for these screens yet, but it is very unlikely it will sell them for the price that one would expect a television for a living room to sell for. In addition, there aren’t a lot of in-home technologies that can take full advantage of a transparent screen, so beyond the “neat” factor, there isn’t a niche for them in the general market just yet. They will make powerful store advertising vehicles, but for now, their usefulness ends there. It’s only a matter of time before we see more affordable transparent screens and more technologies that can use a transparent screen, however.

Currently, Samsung does not have a release date set for these screens, though the company has said that it should be soon.