The Future Of Crypto & Web3 with Scott Paul

Nexus CEO Earl Foote was joined by Scott Paul on this recent episode of TechBeat to talk about how to break into crypto, the future of Web3, and the mounting support for innovation in Utah.

TechBeat: The Future Of Crypto & Web3 with Scott Paul

Have you harnessed the financial opportunities offered by new crypto products and Web3? Discover how they work and how Utah is slowly becoming an incubator for innovators in this episode of TechBeat, featuring Scott Paul.

Nexus CEO Earl Foote was joined by Scott Paul on this recent episode of TechBeat to talk about how to break into crypto, the future of Web3, and the mounting support for innovation in Utah. 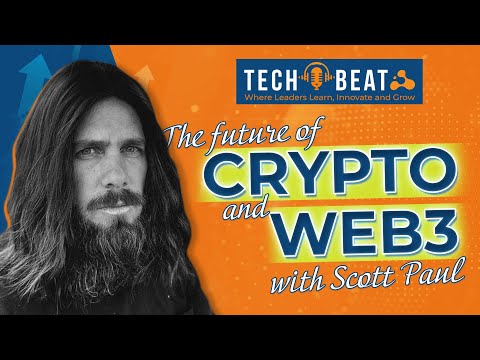 Who Is Scott Paul?

Scott Paul is one of the most well-known and respected figures in both the blockchain industry and the martech industry.

He is a frequent speaker at blockchain and martech conferences and has been featured in major publications such as Forbes, TechCrunch, and VentureBeat. As a blockchain industry leader and a proven martech industry veteran, Scott Paul is uniquely positioned to help companies succeed in the new digital economy.

The Beginning Of Scott Paul’s Journey

As is often the case for entrepreneurs, Scott didn’t necessarily fit into every setting and environment he encountered in his childhood. He says he spent much time being “in trouble” at school, as he often did something the other kids weren’t.

“I was the black sheep of everything,” says Scott. “Like many founders and entrepreneurs, you’re blazing new trails; you’re zigging when everyone is zagging.”

Despite the detention and other punishments that resulted from his “zagging”, Scott believes this was for the best. It taught him to be comfortable being different, operating on the fringe and searching for new things.

“Visionaries usually are on the fringe,” says Earl.

Earl agreed with this point, noting that those most often on the cutting edge of a given thought or field spend much of their time trying to convince others of what they’re trying to achieve. To be an innovator or an entrepreneur, you must have a thick skin for dealing with naysayers.

“I got used to being someone who is always different,” says Scott.

The Secret To Scott’s Start As An Entrepreneur

While many entrepreneurs would point to a specific meeting, a breakthrough thought, or a “lightning bolt” moment as the birth of their career, Scott was quick to highlight his partner and wife.

“What allowed me to succeed is my wife,” says Scott. “In any good duo, you must have a co-founder with complementary skills.”

Whereas Scott had the necessary curiosity, enthusiasm, and innovative mindset that lent itself to the work he was getting into, his wife offered a balance to all those qualities. Scott knows that she brought order, consistency, and execution to everything he did. This allowed them to make a successful life together.

For example, Scott strongly believes that when you’re working towards your first entrepreneurial venture, your goal is to save enough money every month to fund your side hustle. Whatever job or jobs you have is your seed money once your cost of living is dealt with.

Scott knows that his wife helped him get through this phase. When he was working jobs, he didn’t necessarily love to fund his future investments and innovations, it was her that supported him and kept him focused.

With that money, Scott entered the entrepreneurial space around 12 years ago. He and some friends attempted to get into what would soon become a booming market for drones. As is often the case with first attempts, this venture didn’t pan out.

Scott’s not ashamed of this failure. He knows that you need to be able to fail a lot to arrive at something that works eventually.

Thanks to his and his wife’s careful work in building a runaway to support these types of projects, Scott could learn from the failure and apply it to his next venture.

After their eventual success and the acquisition of their company, Scott ignored the advice he was given and quickly spent all his money to seed other people’s ideas. He eventually pivoted into venture capital funding when the money ran out faster than expected. All his time spent getting to know new companies and assessing what they had to offer gave Scott a keen eye for future value.

“I honed a skill for finding winners in the pre-seed stage,” says Scott.

The Launch of Giddy

Scott has been an active figure and thought-leader in crypto for 6-7 years. Recently he was excited to see the launch of a new crypto-based app and service he invested in: Giddy.

Giddy is a fast-growing crypto tech company in Salt Lake City, Utah, which was founded with the mission to help users “become their own banks” using decentralized finances (DeFi). Giddy’s services allow users to access DeFi and financial capabilities that everyday consumers wouldn’t normally have access to.

The Giddy app launched in the last few months, and the company has quickly reached a 153M market cap in the meantime.

“I’ve always wanted to deliver a product that everyone in the world could touch,” says Scott.

If you’re new to crypto and Web3, that’s OK. It’s an exciting new space, and it can be rather complicated when you get into the details of how blockchains work.

Scott’s advice is to try it out simply; if you take a little bit of money, even $20, and purchase an NFT or a coin, you can get a firsthand experience rather than reading dense articles and watching long videos. The best way to understand it is to get your hands dirty.

It’s important to understand that crypto isn’t just the “stock market” you’ve likely heard about through social media and news. While there is potential to invest in a coin or crypto product and sell it after its value has risen, that’s not the only financial application of this technology.

“That’s the problem with crypto: everyone wants to buy something and see the value go up,” says Scott. “It should be somewhat stable. The yield, what you do with your coins, should be important.”

Over the course of this episode of TechBeat, the conversation also covered Convoi, a company that Scott co-founded with Trent Mano to support new innovative offerings in Utah.

“The premise is to find as many companies that are pre-seed in Utah and give them a check,” says Scott.

The funding at Convoi is handled by AngelList, a crowd-funded investment firm. Rather than working with a small portfolio of extremely wealthy investors, everyday consumers can support new ventures with less funding. At the same time, Scott and his co-founder can promote and seek new companies starting up in Utah. The goal is to simply create an incubator that funds the vast majority of innovative ideas—as simple as that.

Convoi is primarily interested in Web3-based ideas and consumer products. Scott notes that they’re not enthusiastic about SaaS products right now, as the market is rather saturated with them.

“I want to create gravity in Utah,” says Scott. “I want to get so much money that we’re able to fund all the things we see.”

Scott and Earl agree that this is a complicated prospect. Conventionally and historically, new money and tech-based money don’t stay in Utah, even if it’s raised here. People more often make money and move to other investment communities. That’s why Scott is so excited about Convoi.

“Let’s make Utah the most prolific pre-seed environment in the world,” says Scott.

You can apply directly online if you’re interested in seeking funding from Convoii.