Experts anticipate a series of Russian-based cyber attacks against US targets in the coming months. Discover a few simple and effective ways to defend your Utah business in this video by Earl Foote, Nexus IT, and Blake Schwank, Colorado Computer Support.

Since Russia invaded Ukraine, cyber warfare has been on the rise, and not just for businesses in Eastern Europe.

Given that the US is spearheading sanctions against Russia, businesses across the country should be on high alert for Russian-based cyber attacks.  In recent weeks we are already seeing an uptick in cyber attacks and breaches against local companies.

Check out this new video by Earl Foote, Nexus IT and Blake Schwank, Colorado Computer Support to better understand which cybersecurity layers you need to keep your Utah business safe: 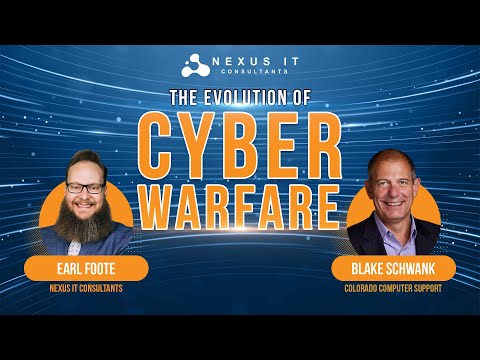 Ukraine Isn’t The Only Target For Russia Hackers…

In mid-February, Ukraine suffered a major cyberattack on its governmental and banking systems, leaving a daunting message: “Be afraid, expect the worst”. Furthermore, other attacks against western targets have occurred over the past few weeks.

This is simply the reality of the modern world at this point. When nations go to war, it won’t only be on a physical battlefield.

Is Your Business A Potential Target?

Yes—this isn’t the first time that nation-state attacks have occurred in US cyberspace, and it won’t be the last.

“It’s not just DoD contractors that are targeted,” says Earl. “Small to medium-sized businesses are much easier to infiltrate, so they’re targeted all the time.”

For small businesses across the country, the situation is especially dire. According to a study conducted jointly between Cisco and the National Center for the Middle Market, over 50% of small businesses have no cybersecurity strategy or plan in place and for those that do, most have not reviewed the plan in over a year.

A cybersecurity strategy and plan, once created and adopted, must be reviewed at least annually to ensure that current threats are being included. Right now, that means protecting against Russian-based cyber attacks.

Cybersecurity is not a one-and-done solution; the threat landscape evolves at a rapid pace and frequent reviews ensure that the plan will help reduce an organization’s cyber risk profile. That’s why you need to be aware of the greatest threats to your business and plan against them.

The Evolving World Of Cybercrime

Ransomware is a type of malware or trojan that infects a network and blocks access to data stored on those networks by encrypting all the files in a way that is difficult, if not impossible, to decrypt.

The hackers who deploy the malware agree to provide a unique decryption key in exchange for a payment, usually in Bitcoin or some other cryptocurrency, making tracing and prosecuting the hackers difficult.

The way cybercriminals use ransomware has evolved. They have improved their tactics and capabilities, allowing them to do much more damage, and demand much more money.

Sophisticated attackers sneak ransomware into a breached network and then lay dormant for weeks or months, ensuring their method of entry isn’t discovered right away. This gives them time to embed themselves, steal data, and more, all before they actually activate the ransomware and infect the systems.

Without undertaking extensive forensic processes, an infected business won’t know how far back they need to go to back up their systems. Or, even worse, it will be so far back that they’ve already expunged those backups to make room for more recent versions.

Modern forms of ransomware can even target and infect backup hard drives and cloud-based data if the connections are left unsecured. That’s why cybersecurity professionals are now recommending digitally-air-gapped backups as well.

Given the effectiveness of modern ransomware attacks, defensive methods and best practices from just a few years ago are already losing feasibility. All of this is to say that you can’t assume you won’t be infected at some point.

Don’t assume a simple cybersecurity defense will actually protect you from the many cybercrime threats out there. After all, did you know that, on average, there’s a cyber attack every 39 seconds?

It could be a ransomware infection. It could be a phishing email. It could be one of the many other methods cybercriminals employ today. This is why backups are no longer a viable redundancy on their own.

Ransomware 2.0 usually involves some form of data exfiltration, in which the target’s data is copied by the hacker. They can then threaten to release or sell this data on the Dark Web, still holding the target to a ransom, even if they have a backup.

The point is that cybercriminals have an extensive arsenal of weapons to attack with—are you hoping your lone firewall will be enough to keep your business safe from all of them.

“It’s a business problem,” says Earl. “You have to think about policies, processes, practices, and people.”

Given how complicated cybersecurity is, the last thing a business owner should do is try to handle it independently, especially right now during a major cyberwar.

Unless you have the resources necessary to invest in proven cybersecurity expertise on your staff, you won’t be able to effectively defend business data from modern cybercrime methodologies.

We can help Utah business leaders develop a resilient cybersecurity posture for their organizations. Get in touch with the Nexus IT team for support in improving cybersecurity.